From Vision to Reality: Our first year 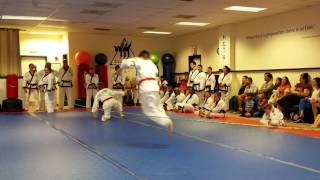 RESPECT: Treating others the way you want to be treated

On July 26th, 2017, Guardian TMA hosted a Dan (black belt) promotion ceremony for two schools, Guardian TMA, of Sewell NJ and Brnich Karate Academy, of Deptford NJ. Eleven new black belts were promoted: three promoted to 1st degree, seven promoted to 2nd degree, of which five are from the same family, and one promoted to 3rd degree. It is truly an outstanding achievement. Here is a highlight video from the ceremony.